A Close Thing is the 58th episode of Numberjacks and the 11th episode of Season 2 and released on October 8th, 2015 and can only be watched on school days. A Circle At Both Ends is next and Half Time is previous.

A girl cannot get near her teddy, and grown ups need help with more things being too close. Six flies out to sort the Problem Blob.

Two, Four and Six are in the gym, planning for Two to jump and a sentient, flying tape measure known as the Measurer to determine how far Two should jump. "Not too far," said Two. The Measurer measures out a distance which they mark with one of his buddy blocks, and Two manages to jump the entire distance. Six then tells the Measurer to measure a distance for Four to jump. It does, but Four thinks the distance is too far, so the Measurer sets a new distance, which they mark with one of his buddy blocks. Four points out that he could only jump as far as Two's buddy blocks, but Six believes that to be too close, so Four jumps his distance. Six asks the Measurer how far he has to jump and it sets distances that Four and Six find too close. Finally, however, they are satisfied and mark the distance with one of Six's buddy blocks. Six makes the jump and immediately afterwards, the alarm sounds, so they make their way to the control room.

Agent 58 informs the Numberjacks that a little girl is having trouble because her teddy bear keeps teleporting around her room. He then asks if they will send someone. Six affirms, then volunteers to be launched.

After being launched, Six lands on a 6 in a shop. Agent 37 calls in, reporting that a chair has been teleporting around in a similar way to the teddy bear, disallowing a woman to sit down. Six is next to the woman and he sees a man's bike teleporting around as well. The man tries to creep up on the bike, but it does not work. Agent 18 then reports that two plates at a restaurant are doing the same thing. Four asks for the common factor and the agents say that the objects are all moving too far away from their owners. Six goes up to look closely at the bike and sees a blob of slime. The other numberjacks find blobs on the chair and the plates, signifying that the Problem Blob is the one causing trouble.

The Problem Blob then re-blobs the objects, making them come back, but too close, resulting in them being right on the people. Five imagines what would happen if the Problem Blob kept making things too close or far and Three fires up the brain gain machine. They succeed in making the objects stop teleporting too far or close, but the woman's chair teleports in front of her, the man's bike teleports behind him, and the plates teleport next to the dinner knives instead. Three makes brain gain to put the things in the right positions. However, Six gets blobbed and lands on a windowsill.

Six decides he needs help landing as he does not want to land in the water, the rose bush or the chair, so they use the Brain Gain to make him land safely in front of a chair that is between the rose bush and the water and in front of the chair. With Six safe, they use the brain gain to bring the girl's teddy bear back and send the Problem Blob so far away they cannot even see it. Six flies back home and tells about the recap.

Later, Three asks the Measurer to measure very close and as far as possible, the latter scaring Four as it nearly hits him. He then asks the viewers to think of things that are close to and far from them.

If the Problem Blob keeps on teleporting things too close or too far away, anything can happen. 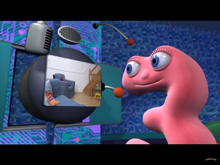 "3 looks at the number 6 for the next locations at the agents."