Numberjacks Wiki
Register
Don't have an account?
Sign In
Advertisement
in: Episodes, Episodes with the Problem Blob, Problem Blob Episodes

Forward Thinking is the 6th episode of Season 1. It was aired on August 9th, 2015. Seven Wonders is next. 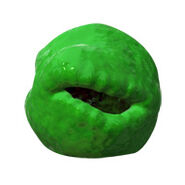 One, Two, Three, and Four are in the gym and Three is keen to play something called the "Bloop Ball Game", but Four is his usual uneasy self. They line up in order of age/numerical order, except for Four, who is in charge of launching the Bloop Ball, but One does not pass the ball like she is supposed to. Instead, she just bounces and repeats, "Bloop!". Three tells One to keep her eye on the ball, so she stares at the ball for awhile and gets back into line.

This time, they manage to play the game properly, with Five joining in. Five passes the ball back, and initially it works fine, but Two is unable to pass it back. Then, the alarm sounds, so Three, Four, and Five go to the control room, leaving One and Two with the ball.

The agent says that the problem is quite small, but Six worries that it'll become bigger. The problem turns out to be that a boy's remote-controlled toy car is stuck due to a log blocking the way. Six is sent because he likes the toy car, and cars in general.

He lands in a car-park, then goes over to where the little boy is. The Numberjacks fear that if the boy keeps trying to move the car forward (like he's doing), the car will break beyond repair, so they ask the agents for advice. The agents suggest stopping the car, which works, but then they notice that the car has been slimed by the Problem Blob.

Six begins to search for the Problem Blob and finds him on a building. He spits out a lot of slime and one glob lands on a random man's shoe. The man starts walking, but finds himself unable to go back for his bag. He is also unable to stop moving, until he bumps into a statue.

Three fires up the brain gain machine, where they make brain gain to get the car and man to go backwards. This works on the man, but unfortunately, he is now unable to go forwards. When he reaches the bench, the Blob slimes him again, resulting in him moving around in place as though dancing. The "dance" ends with him doing the splits.

Six and Three use brain gain to make the front-facing foot go backwards, the back-facing foot go forwards, and the man stay in place. He then flee and Five imagines the Blob causing car crashes, balls to go back and hit the kicker, and people to age backwards.

Then, another little boy can't stop his roller skates, and Six can't keep up, so Five asks the agents for advice. They suggest using the toy car, so Six gives chase in it, and eventually stops the skating boy with brain gain. Finally, the Numberjacks defeat the Problem Blob by making him go forward with brain gain.

After the return and recap, the Numberjacks (except for Seven, Eight, and Nine) go back to the gym and try to play the Bloop Ball Game backwards. This time, they succeed, and Five asks the viewers to look for things that go back and forth.

[Jonathan] That was a good car.

[Alice] But that Problem Blob's slime spoiled it. Oh, that man was funny. One foot forwards.

[Jonathan] Oh, this was a good bit.

[Oliver] A good car for me to chase the man riding rollerblades.

[Laura] And a good driver, too.

[Oliver] Oh, thanks. Now for the Problem Blob.

[Alice] And the agents.

DVD: Standing By to Zoom