Five
Four is a dark blue, male, even Numberjack. He goes out on more missions than 6, 5 and 3. He turned into 14 in Into the Teens. He became 2, 1 and 8 in Half Time. Four is the Numberjack that went on the most missions. He turned into 5 and 6 in One More Time.

Extra powerful brain gain made by 8 made him symmetrical in More 4. Four's eyes are brown and he is blue in colour. He tends to disagree with Numberjack Three but despite that, they're very good friends.

In the first episodes of season one, his catchphrase is, "Um, I'm not sure." In the episode "3 Things Good", Four repaired the machine that launches the Numberjacks to go out on missions when it broke down.

He is the numberjack that goes on missions the most. 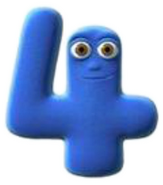 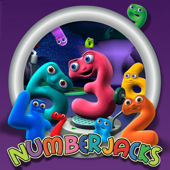 He is the numberjack that goes on missions the most.

His number appearance has changed more often than the other main Numberjacks.

Four has been compared with Minecraft YouTuber Jack Manifold on Twitter and TikTok.