The Container Drainer is the 20th episode of Season 1. It originally aired on 23 February 2007 and was released on DVD volume 5. Say What You Mean is next.

Everything is empty thanks to the Puzzler - Four and Six help Five to fill things up again, but Three gets kidnapped by the Puzzler.

In the Cosy Room, Five asks Six if he's seen her Buddy Blocks. Six hasn't, in fact his are missing as well. Three can't find hers either. Five jokingly suggests that the Shape Japer took them and Six seriously suggests that they ran away, but Three has no input apart from "Oh no!". Then, Four comes in, reassuring the others that he knows where the Buddy Blocks all are: he "tidied them away" by putting them, along with his own, into a box. Six, Five, and Three are warning Four for doing it without their permission and call the blocks out. The alarm then goes off, so they go off to the control room.

At the control room, Two is at the control panel and is unhappy when Three, Four, Five, and Six take over. Agent 25 reports that a bottle of soft drink and a sand pit have instantly emptied for unknown reasons. Three really wants to do the mission. Five feels like she needs to do it but lets Three tag along.

Five and Three land on a pair of fridge magnets and Three is very excited, however Four and Five are more serious with Five saying, "Calm down" and Four declaring that Three needs to be careful. However, Six is more confident, stating that Five will look after her. Some ice cream disappears from a tub and then Agent 61 calls in, saying that she saw the Puzzler. Agent 96 then informs the Numberjacks that trouble is underway at the cafe and Five sets off, but she can't find Three.

At the cafe, Five still can't find Three as Six told her that he Four, and Five have to stop the Puzzler before it is too late and she imagines the Puzzler emptying a drink carton (juice box), some balloons, and a pool. She then bounces along a sidewalk and onto a bench. The Puzzler then arrives and reveals that he put Three in a bubble. He gives Five a puzzle: put the containers that hold more/less stuff in order. Three suggests filling them up again to determine which would hold more or less and Six fires up the brain gain machine.

However, everything fills up so quickly that they can't tell how much it is. The Puzzler claims he's "feeling kind" and gives them a second chance. The agents suggest filling them up bit by bit and counting how many surges of brain gain they need. They do so and determine that the bottle requires two zaps, the ice cream tub four, the bowl one, and the sand pit a hundred. They put them in order, Three is released, and the Puzzler releases Three and leaves.

Three and Five come back and Three apologises for straying. After the recap, Three and Four talk to their Buddy Blocks in the Cosy Room: Three tells hers not to run away and Four has found a box for his. He then asks the viewers what their smallest and biggest containers at home are.

If the Puzzler carries on making things empty, anything could empty.

1. Drink cartons won’t be much fun. There’ll be no drink inside. Slurp!

2. And balloons won’t be much fun. If there’s no air inside them.

3. Oh! (Splashing). And going to the swimming pool will be no fun at all. Cos there’ll be no water to play in. 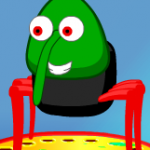