Five is helping Six find his buddy blocks as he feels he's lost one of them. The two Numberjacks managed to find three Buddy blocks, and then Six locates the other three relatively quickly. But it turns out the Buddy blocks were being cheeky today and they raced off again. Five manages to catch three blocks, but Six only finds two, adding the numbers up to five. Both Numberjacks glance back and find the last buddy block by the slide. Six buddy blocks once more. Then, the alarm goes off, and Five says it's her and Six that has to rush off. They regroup with Three and Four at the Control Room.

Agent 42 reports a problem: a girl and boy had lost bouncy balls. Five tells Six that he's good at looking for things, so it's decided he's going out on the mission. Five checks the room, but finds some children with their mum. After they leave, Four, Five and Three proceed with the launch.

When Six gets there, the Numberjacks try to figure out a link between the two sets of missing balls. Agent 55 and Agent 68 help the Numberjacks realise that there were three balls that had gone missing both times. Agent 85 rings in and tells the Numberjacks the balls are at the campsite: in a taco shell! The lady attempts to eat the taco, but the balls go flying all over the place. Then, Six notices that strawberries were disappearing, and Five wonders where they'd end up next.

Agent 85 reports something's happened at the bowling green, and the strawberries turned up there in place of the bowling balls. The agents then tell them that someone is taking two lots of three and making a tricky six. Six then sees the meanie of the episode: The Numbertaker. Only this time, he wasn't just taking numbers, but making them too.

Just when the Numberjacks thought it couldn't get any worse, it did. The Numbertaker/maker took three bowling balls, and another three, and was going to make a tricky six somewhere.

Down at the beach, the balloon man finished his balloon making and was about to do juggling, but the Numbertaker put the bowling balls there in place of his juggling balls. The balloon man has a tying time to juggle.

Six is missing some of his buddies again, and Five notices two of them nearby. Five then gives the challenge, how many more buddies are needed to make six. 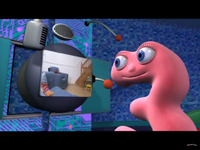 3 how see without number 6 they gain, at 4 from Brain Gain.